After our misfortune in the Gobi desert, we came back to Ulan Bataar, where Manolo’s sister Eva was waiting for us. The original plan was that she was going to join us during the second half of our Mongolia tour. As our trip was cut short, we had to find a solution quickly, and so we decided to go on an organized tour of Central Mongolia. To cut costs, we found one more travel buddy: Gaulthier, aka “the Frenchy”.

Day 1 – camels and wild horses. After meeting our driver and our tour guide Tony, we hopped in our vehicle for the next nine days – a Russian van this time called ‘the tank’ – and started driving. After a stop at the market to buy food, loud Ulaan Bataar started disappearing, appartment blocks were replaced by green rolling hills and cars by sheep and horses running free in the infinite grasslands.  Our first day was a driving day as we had to do a nice amount of kilometers, so except for spotting some wild horses in Khustai National Park not much happened until we arrived to our ger that evening in little Gobi. Getting our stuff out of the car, the owners of the camp – an old Mongolian couple of probably 130 years old – came to greet us, and Sophie had the feeling she had already seen the couple before. This was the exact camp she had been in 5 years ago when she was in little Gobi!

After we changed our clothes – it can suddenly get chilly in Mongolia – we went for a sunset camel ride. Normally all camels are attached to each other and are walking slowly, but by the end of the tour, Manolo had managed to convince the camel guy to let us ride the camels by ourselves and to let us gallop. Figuring out how you ride a camel proved to be quite easy and we ended up racing each other back to the camp. An unforgettable experience! 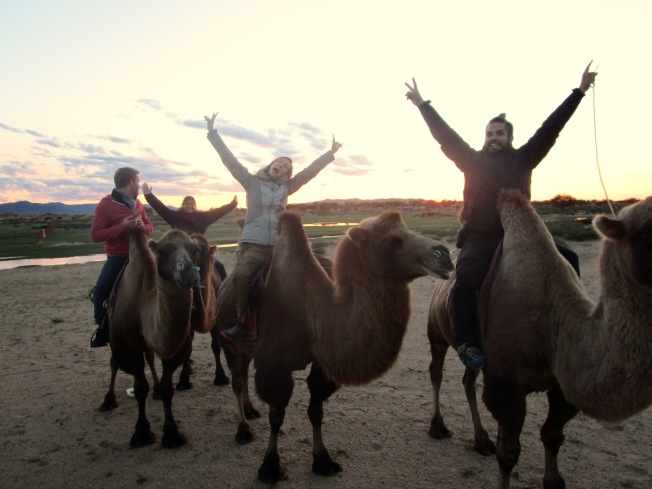 Day 2 – the old capital. The next morning we visited the old capital of Mongolia, Karakorum (or Gharaghorin as Mongolians seem to pronounce it). However, not much is left of the capital – that tends to happen with cities consisting mainly of nomadic tents. After that, we had some more driving time – Mongolia is a vast country – before arriving to Orkhon Valley in the evening, where we were once again treated to an absolutely stunning night sky full of stars and the milky way.

Day 3, 4 and 5 – horse trekking to the Eight Lakes. There is no better way to discover Mongolia than on the back of a horse. So after a morning of waiting for the horses to show up and playing cards – even when our guide spoke English, misunderstandings and communication problems are common in Mongolia – our horses arrived and we saddled up for an afternoon of riding through the infinite steppe. This time, our saddles were padded (unlike the first time we went riding and were sitting on a wooden saddle, leaving Sophie with a nice amount of bruises), and our horses were more energetic and manageable, allowing us to fully enjoy galloping through the grasslands. (Except maybe for that moment when Manolo  was thrown off his horse because he scared the poor thing by taking off his jacket – even though the horsemen warned us not to do that.) That evening we arrived to a place that was even more in the middle of nowhere than usual. After watching our guide Tony wrestle with another Mongolian, drinking vodka with the locals and Manolo trying (and succeeding!) to catch a goat, we went to sleep under a beautiful sky full of stars. 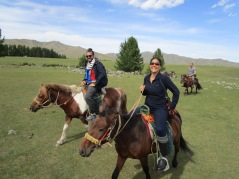 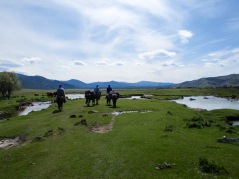 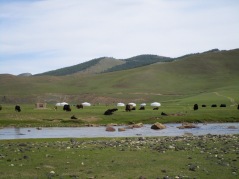 The next morning, we got on our horses again, yet this time slightly less enthusiastic as our muscles and behinds were in complaining mode. The scenery changed from grasslands with some forest once in while to a more thick mountains forest with rocky paths that were difficult to climb for our horses sometimes. Luckily Mongolian saddles have a handle in the front to which you can hold on, as sometimes the horses had to jump to get passed a bigger rock or even slipped. After crossing the mountain we arrived to the Eight Lakes, a beautiful volcanic area with – you guessed it – eight lakes which is difficult to access by car. While we let the horses rest for a bit, we set up our tent (ok, Manolo set up the tent and Sophie watched) and then watched how a sheep was killed to be eaten as barbecue that night. After going for another horse ride to explore the area some more, we socialized with the family who killed the sheep drinking yak tea, trying yak butter and braiding our hair (including that of Manolo).

After the warm evening in the heated ger of the locals, the night in our tent was cold. The next morning we were awoken by weird noises – some kind of snoring that seemed to come from something very close by. Zipping open our tent we discovered the source of the noise: we were encircled by a group of yaks! Also, our tent and the grass were covered in ice, explaining why we had been so cold all night. Nothing a hot cup of tea couldn’t solve, though, and we got back in the saddle. We rode all morning, and arriving back to our starting point, we were sad we had to say goodbye to our horses (our butts not so much, though).

After a late lunch it was time for some more driving. And some more flat tires. Lucky for us most drivers in Mongolia are also mechanics and incredible efficient at changing a wheel or fixing a hole in a tire. After no time we got to enjoy the bumpy ‘roads’ again. That night we arrived to Tsenkher hot springs, where they had hot water for the first time during this trip. No need to explain that we really really enjoyed the feeling of water on our skins and finally being able to wash our hair!

Day 6 and 7 – another lake, more ice and an extinct volcano. The next morning we slept late – we were on holidays after all – and after brunch Mongolian style, we got back in the tank for – yes – some more driving on bumpy roads. A flat tire, thousands of sheep and horses crossing the road and a stop to stock up on some more veggies later we arrived to the White Lake, another beautiful lake in an gorgeous rocky volcanic setting. The rest of the evening/night we fell into our enjoyable routine of admiring the views, socializing a bit with the locals or other travelers, drinking some vodka, playing Mongolian poker and gazing at the incredible night sky.

The next day we didn’t have to go anywhere, leaving us all day to explore the area. So we hiked all the way up to the top of the volcano, watched Eva and the Frenchy crawl into a man hole (Sophie is just a bit claustrophobic and Manolo’s shoulders were too wide for the narrow hole) and climbed some rocks to reach a natural cave with a tiny glacier.

Day 8 and 9 – saying goodbye to the Frenchy and driving back. 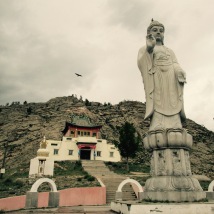 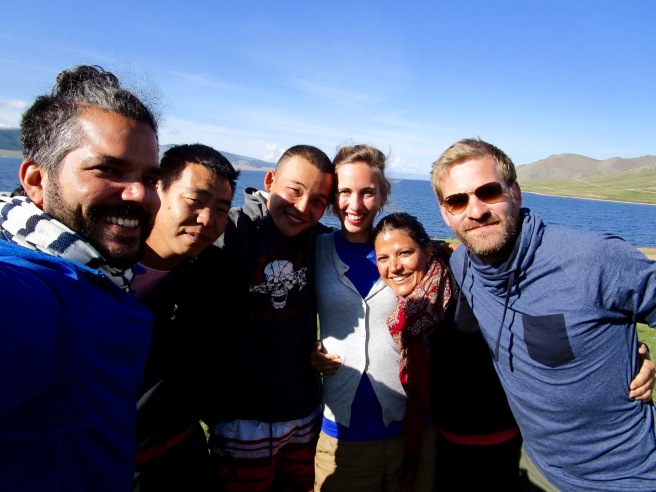